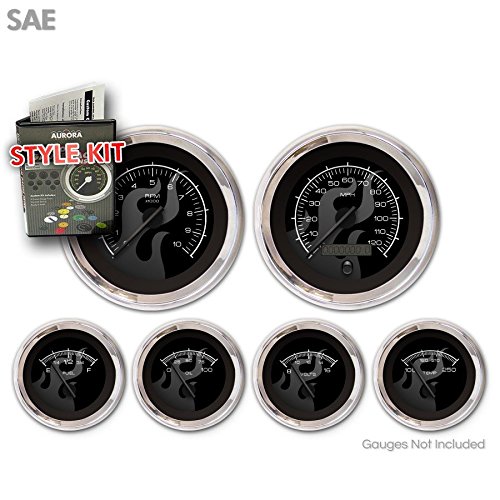 Style Kit - SAE Ghost Flame Black, Black Modern Needles, Chrome Trim Rings Aurora Style Kits lets you transform the look of your Aurora Gauges with ease. Each gauge style kit includes gauge faces, needles, and trim rings for oil pressure, fuel level, tachometer, speedometer, volt, clock, oil temperature, and turbo boost. Simple, detailed instructions make changing out your Aurora gauge faces, needles, and trim rings a snap - even when the gauges are installed. Choose from thousands of gauge face styles or create you own online. Available in Imperial (SAE) and Metric. Aurora gauges offers the worlds largest selection of gauges and instrumentation for your ride, and are the world's only gauges offering interchangeable gauge faces, trim rings, and needles. Choose from thousands of designs and options, or custom create your own .