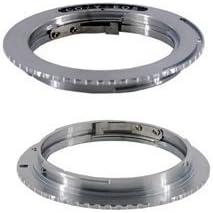 High quality new Contax/Yashica lens adapter ring with a lock pin for Canon cameras with EF lens including digital SLRs. This special lens adapter ring enables users to apply Contax Zeiss Yashica lens on Canon EOS bodies, 35mm or DSLR in stop down mode, which means one will be able to get stop down manual exposure, aperture priority exposure.This adapter is made of high quality alloy steel and the mounting is even easier than you think.With this special adapter ring, you would not feel frustrated any more about the limitations of different brand lens. Package Details Weight: 38.52 g Size: 7.8*7.8*1.5 cm Package Includes 1 ? CO/Y to EOS Adapter Ring